What is a Supermoon?

In recent years, the "Supermoon" has become more and more famous, and it attracts many people to observe enthusiastically every time it appears. The name "supermoon" was proposed by the American astrologer Richard Nolle in 1979. It is a phenomenon in which the new moon or full moon nearly coincides with perigee. When the moon is near the perigee, a new moon appears that is called super crescent; and if the moon is exactly the full moon when it is in the perigee, we call it super full moon. Because the moon orbits the earth in an elliptical orbit, the distance between the moon and the earth is constantly changing, the closer the moon is to the earth when the full moon occurs, the larger the full moon appear. Astronomy experts explained that the average distance between the moon and the earth is about 384,000 kilometers, the nearest is about 360,000 kilometers, and the furthest is about 400,000 kilometers. This change in the distance between the moon and the earth has caused the apparent diameter of the moon to change. 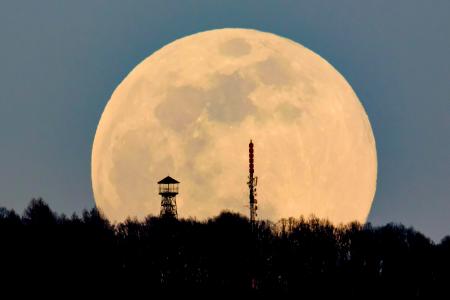 When is the Next One?

On February 9, there will be a supermoon. This is also the first of four supermoons for 2020. The Moon will be at its closest approach to the Earth and may look slightly larger and brighter than usual. At that moment, a full moon at perigee appears roughly 12.2% larger in diameter than at apogee. While the moon's surface luminance remains the same, because it is closer to the earth the illuminance is about 25.1% brighter than at its farthest point, or apogee (Depending on weather conditions). However, this change in size and brightness is actually not easy to detect by human eyes. You need to use a professional astronomical telescope to observe it. We recommend a popular saxon 6" DeepSky Dobsonian Telescope which comes with a light-grabbing aperture of 153mm and a focal length of 1200mm - perfect for viewing the Moon upclose as well as bright deep sky objects.